When the cemetery was established in Cemetery Road (now called Williams Road), the nearest cemetery was at Mount Moriac (known as Duneed Cemetery).  Peter Mansfield in his book "Barwon Cemeteries" states that the first recorded burial at the cemetery was on 23 October, 1864.​ According to cemetery records there were some early burials, some before the cemetery was gazetted. After extensive research by the Geelong Family History Group it was established that the earliest burial was of Charles Tylee who was buried on 2 October 1864. Another early death was John Harkness (1864) who was killed on the main road when his vehicle overturned after striking a heap of road metal. Other early settlers buried  here are Agnes Mackenzie (1794-1883), the mother of John Mackenzie of "Ghazeepore" and Deborah Brien (1796-1883). The earliest born was John Ford (1787-1870).
​
Mr. Faraway was the Sexton. A live fence of Acacia Paradoxa (South Australian kangaroo wattle) was planted around the cemetery boundary. This was lost in the disastrous fire in February 1891. Wooden railings around the graves were also destroyed and nothing was left but the white marble tombstones that gave a colourless appearance of black and white. Hitching rails were erected either side of the gate.​

The cemetery has many examples of the work of early monumental masons — Nathaniel Brown, Clement Nash, Charles Wilcox and Joseph Smith.​
Articles:

This cemetery in Church Street Grovedale was once named Germantown Cemetery. It was next to the first church built in Germantown on land donated by Samuel Roehr. It had mud walls and a grass roof. The first church service was on 24 June 1854.  The cemetery is of historical importance for its association with the first German Lutheran settlers who came to Australia in the 1850s. They had been brought to Australia by Dr Alexander Thomson to be employed by him as vine dressers. In 1849 four Prussian families who sailed in the Emmy were Bieske, Baensch, Winter and Kerger. Later families were Andressen, Rossack, Kosseck, Hartwich, Pacholke, Renzow, Heyer, Schultz, Baum, Monn, Jasper, Lorke, Schneider, Herman and Klemke. Many of them occupied one acre properties near Waurn Ponds Creek. A memorial to these settlers was established as a centrepiece to a small rose garden. Many of the old headstones in the cemetery have inscriptions in German. Some of the oldest sandstone memorials have fallen and are in pieces. The first burial was Ann Bieske on 1 January 1855.
​
Articles:
​  Andriske, Samuel
Benari, Albert
​Gogoll, Louisa and Gottlieb
Handt, Rev John Christian Simon
Handt, William
​   Handt, Henry
Rau, Augustine Wilhelmine (wife of Julius)
​   Rau, Julius Heinrich
​   Tepper, Theodor
​ 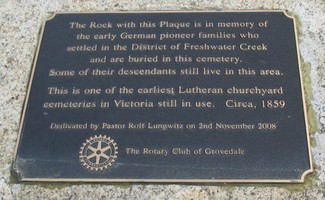 The Lutheran Cemetery in Anglesea Road Freshwater Creek was established about the same time as the Lutheran Church known as Waldkirck, meaning "the church in the forest". It was a wattle and daub church built in 1859. It was replaced by the present bluestone church, designed by architect Robert Smith Tuffs. The cemetery has historical value as a record of the early settlers in the area. It is listed on the Heritage Register and with the National Trust. This is a rare example of a churchyard cemetery which is still in use. Many of the early inscriptions are in German. The first burial took place in 1860 when eighteen year old Louisa Seiffert died of pneumonia.

The first Germans who came to Geelong settled at Germantown (Grovedale) and Freshwater Creek. Until about the mid 1920s this cemetery was referred to as Puebla Cemetery (probably because it was in the Parish of Puebla).

​It was a private cemetery and did not apply for grants or submit annual reports to the government. 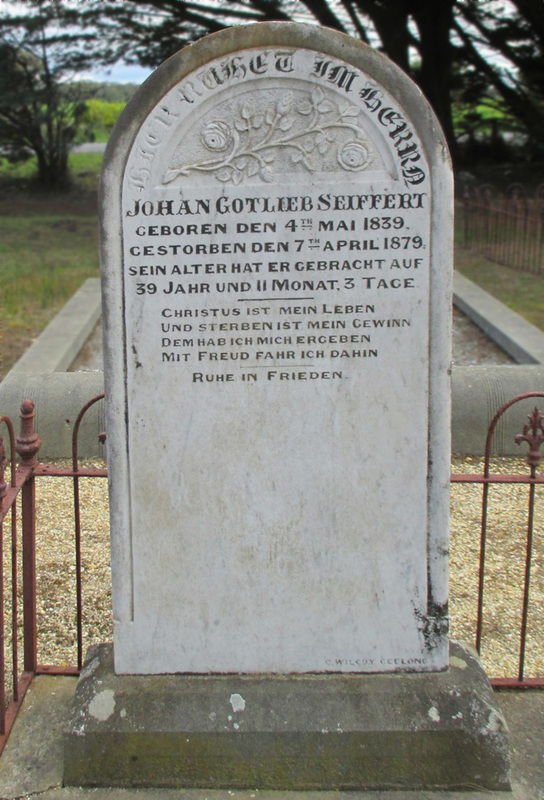